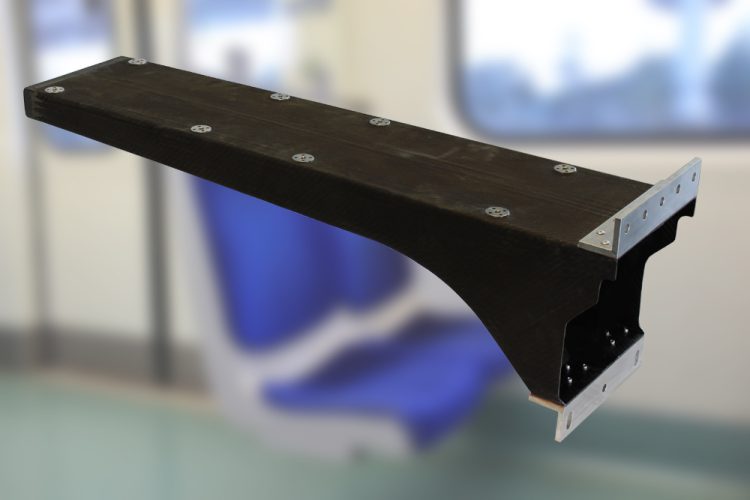 A lightweight rail passenger seat support manufactured from a fire-resistant bio-resin prepreg has been nominated as a finalist in the Land Transportation Category of the 2019 JEC World Awards.

The seat support was designed and manufactured by Bercella using materials supplied by Composites Evolution. Extensive testing of the structure was performed by Element Materials Technology.

A key innovation of the component is the use of Composites Evolution’s Evopreg PFC prepreg. Evopreg PFC was specified for this application because of its excellent fire performance, low toxicity and outstanding environmental credentials. The base resin is 100% bio-derived, thereby providing a safer and more sustainable alternative to traditional phenolics for equivalent cost and performance.

The seat support, which is 1 m long but weighs less than 5 kg, has passed a wide range of tests including static loadings and fatigue cycling. It has also met the most stringent requirement, Hazard Level (HL) 3, of rail fire standard EN 45545.

Gareth Davies, Composites Evolution’s Commercial Manager commented: “The team are honoured to have their work acknowledged by these prestigious awards. The seat component represents the culmination of a two-year development programme by the partners and we’re delighted with the outcome. We’re particularly pleased with how well Evopreg PFC has performed in both the structural testing and fire testing.”

The award winners in each category will be announced at a ceremony during the JEC World exhibition in Paris on the 13th March 2019. Composites Evolution will be exhibiting at the show on stand S50 in Hall 6.

Resources
How Sustainable Materials are Shaking up Motorsport 7th April 2021